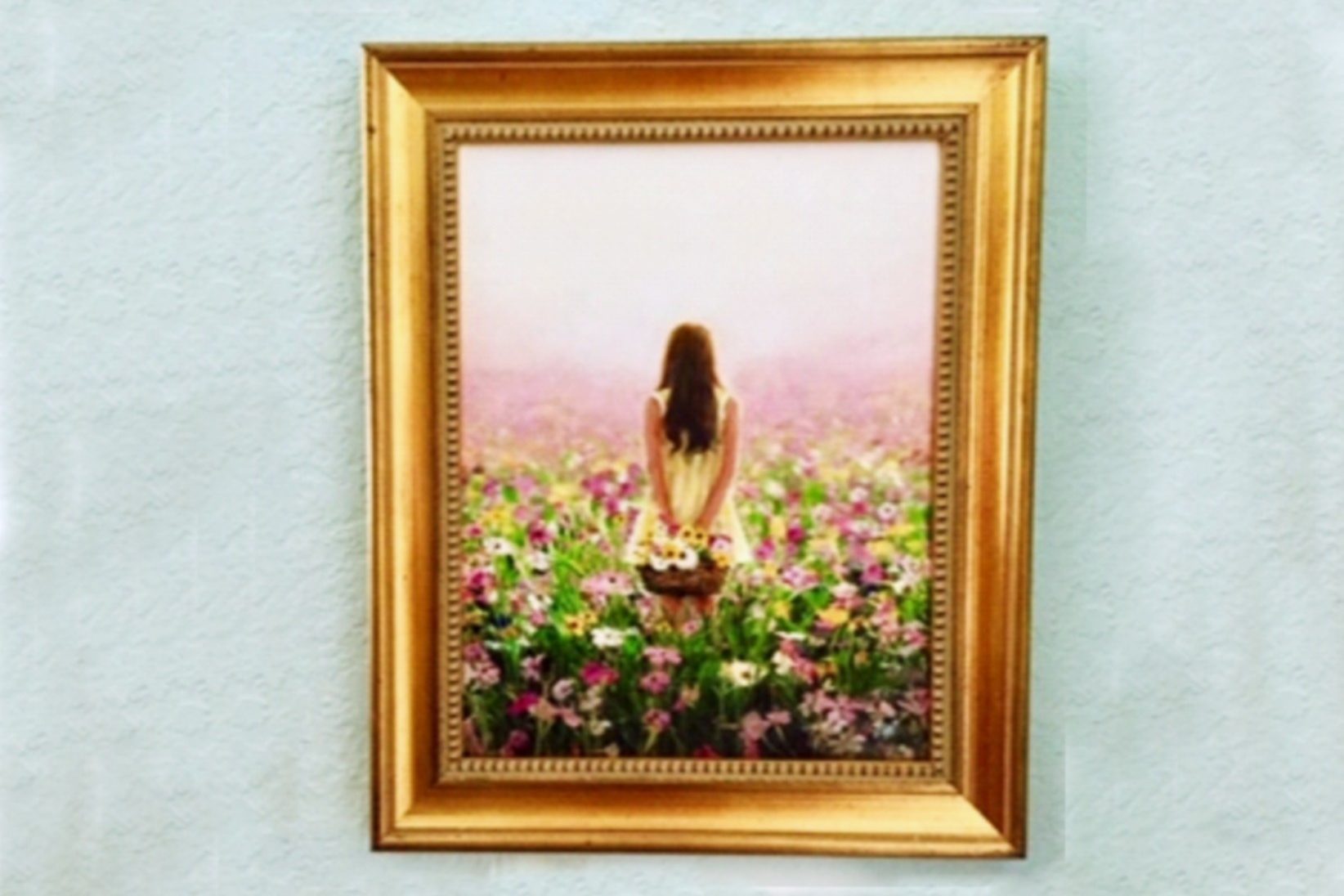 There’s always a story behind every story, and there is a story behind my recent book, THE BIRTHDAY PORTRAIT. A few years ago, my literary agent encouraged me to expand a Christmas story I had written into a novel. How wise she was for THE CHRISTMAS PORTRAIT became my first published novel, and thus opened the door to the publishing world for other books that were percolating in my head.

THE CHRISTMAS PORTRAIT was the story of a ten-year old girl facing her first Christmas after her mother’s death. A couple of publishers turned the story down because it was too “gritty” for a Christmas book. I was a bit perplexed because for me and most folks I know, life is often gritty, but we learn to live despite challenges and sadness and loss. Apparently, others agree with me because I still hear from readers who buy this book nearly five years later. Readers identify with the emotions and find encouragement in what they learned from young Kate. Ah . . . and many of them ask me about the mysterious Mister Josh. 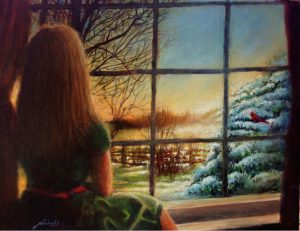 Bill’s painting of young Kate in THE CHRISTMAS PORTRAIT

I’ll tell you a secret. Writers grow very attached to characters. In fact, sometimes I find myself almost praying for my characters because they have become so real to me, but then I realize the power in my computer keys to come to their rescue. These characters are real because as I write, I live in their skin, in their world, and I see what they see and feel what they feel as I pull from my life experiences and observations to tell their stories. I know their favorite foods and colors, their quirky mannerisms, and what they think. If these characters are not real to me, then there’s little chance they will be real to the reader.

Writers will tell you the two most thrilling words they type are the words THE END. I’ve been known to blow up my computer screen with those two words with bolded print as large as I can make it. Then I smile and breathe deeply. I’ll let you in on another writer’s secret. It’s not the end. It’s just a beginning of sorts – editing, more editing, new scenes, rearranging scenes, proofing, and correcting. A book isn’t finished until it’s on the shelf at the bookstore.

And sometimes, the book is on the bookstore shelves, but the story isn’t finished. Such was the case of young Katherine Joy Harding whom I called Kate. She was one of those characters who wouldn’t let go. She was gritty and salty and sweet, and she was real to me. I was sad when I completed that book, thinking that I wouldn’t be with her again. But Kate kept returning to me, sitting on the back of my writing chair, invading my thoughts even when I was working on another book. She let me know her story wasn’t finished and that she had something to say about other events in her life. As I began to listen and think about her, more of her story was revealed.

Kate’s story is important to me because I get to address some serious life issues through her eyes – issues of grief, the problem of evil and suffering, the seeming unfairness of life, and most importantly hope. Kate asks the right questions, and I wish I could tell you she gets all the answers, but she doesn’t. Instead she gets some life lessons that help her deal with life’s grittiness. Oh the scenes that rumbled through my thoughts as I penned her story and dealt with these weightier issues! I have an intimate relationship with this book, and in a peculiar way it’s my favorite.

Now to another part of the story behind the story … At the end of a writing day, Bill is always waiting to hear what I completed, sort of like one of those old serial radio programs that caused people to hover around the radio when the supper dishes were washed. And over the weeks and months of hearing the story unfold, Bill had his own ideas too. Only he puts his ideas on canvas. So, when I complete a book, he gifts me with a painting. It’s always a bit of a surprise how he tells the story in his painting. 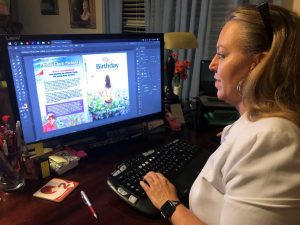 His painting of Kate for THE BIRTHDAY PORTRAIT tells the story of hope, and in it, I can see what her mother taught her and the sustaining nature of her family traditions. So, I was thrilled when this painting became the book cover. Of course, it took the expertise of our daughter, Christina Nichols Quinn, to design the cover and put everything in its place. I think they both did expert and creative work, and I’m ever so grateful. What blessings these two gifted people are to me! This was truly a family affair.

And I’ll let you in on one more little secret—the story isn’t finished yet. Kate is still whispering to me about another chapter in her life, and I’m taking careful notes. Just don’t ask me who Mister Josh is! I’ll never tell. You must figure that one out for yourself. I just know He’s very real to me, too.