I’ve been amused and entertained by all the photos posted on social media this season – you know – the flawless photos of platters of decorated Christmas cookies and trays of fudge and divinity. But did you see anyone post pictures of the kitchen when those goodies were being made? I mean the scenes where it looked like a mess-making contest between the cook and all the kitchen gadgets. Did anyone take a picture of the sixteen pieces of the food processor that have to be taken apart and washed after grinding two cups of pecans for the fudge? Or what about photos of the egg dropped on the floor when the cook was attempting to transport six items safely from the refrigerator to the counter? Or the one where the liquid in the blender was too hot and the lid blew off? You cooks out there, you know what I’m talking about – puddles of butter drips of chocolate and don’t even get me started on the flour and powdered sugar. Listen up, people, nobody posts pictures of that because nobody wants to look at that mess.

And then there’s Christmas dinner. The elegant table is set with the Christmas china and the finest crystal, cloth napkins, brass candlesticks, and red candles in a bed of holly and magnolia leaves. A perfectly basted and browned turkey takes center stage on that table—a picture of bliss. But does anyone recall a photo of the table thirty minutes after dinner – the stained napkins, candle wax on the linen tablecloth, empty, crusty dishes and what’s left of the turkey? Really, have you ever seen a photo of a turkey carcass? Listen up, people, nobody, and I mean nobody wants to look at that mess. 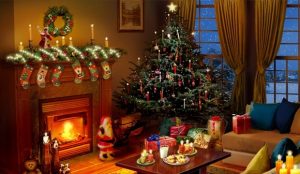 What about photos of the Christmas decorations? Dressed-up trees looking like they stepped out of the holiday window at Neiman-Marcus and the blazing fire in the fireplace underneath a dressed-up mantle of greenery and candles filled my social media newsfeeds. But did anyone take a picture of the dusty boxes and bins that had to be hauled out of the attic? You know, the ones that store decades of Christmas decorations. Or what about the wad of Christmas lights that look like last night’s left-over spaghetti? Or maybe a photo of the trail of trash, bark, and dead insects left on the living room carpet after hauling in wood for that oh-so-lovely fire? Listen up, people, I repeat myself, nobody takes pictures of that because nobody wants to look at that mess. 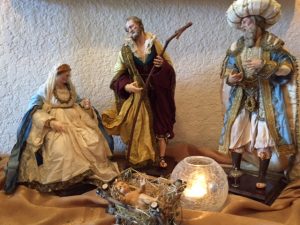 And then comes the Nativity—that holy scene, the one we’ve created where we cover the squalor of the manger with fresh hay. And we dress Mary and the Baby and Joseph in spotlessly clean clothes, and we paint away their fear and her pain and leave them with peaceful, porcelain faces. We don’t want to think about the stench, the animal sounds, and the unpleasantries. Nobody wants to look at that mess.

So, what does all this say about us? Maybe it says God designed us for more. He made us to desire something better than the mire and mess. We desire to be safe, to be loved, to feel whole and at peace. We prefer to look at the beautiful, not the mess, and we certainly don’t want to live there. Think about the wayward son Jesus talked about. He was living in a pig sty, and one day he looked around at the mess he’d made and decided to go home where he could be safe, and loved, and clean again. He was so blessed to have a father to provide what he needed and wanted most.  repeat, nobody wants to live in a mess.

I’ve seen lots of Christmases in my lifetime, and never have I been more grateful for or more in awe of what God really did at Christmas – stepping down out of his perfect heaven into a messy world. Jesus showed us and taught us how to live above the mess. I’ve seen the mess, and I’ve seen beautiful lives of people who say, “I don’t want to live in that.” And the good news is that Jesus says, “Take my hand, I walk with you through the mess on our way Home to our Father, where all is well and beautiful and peaceful.” That’s what Jesus is and that’s what He does. That’s the perfection and beauty of Christmas. Who doesn’t want to look at that?

PS – Just so you know, I did take some pictures of the disaster area of my kitchen while I was doing my Christmas baking. But did I post them? Decided not to, and you know why. Nobody, and I mean nobody wants to look at that mess.