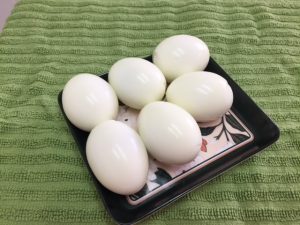 For those of you who know me, you know that I’m a cautious, stay inside-the-lines kind of gal. So, this morning’s post is a bit on the risky side for me. It might stir up something akin to trouble, but it’s time.

As a girl growing up, I had a mother who was fully dressed and had a hot breakfast on the table by the time she woke my brother and me. She made biscuits, muffins, toast, grits, homemade jelly, bacon, ham, sausage and all those things that make a Southern breakfast what most folks can’t wait to put their feet under the table for. And there was ALWAYS an egg of some kind on that plate – scrambled, fried, sunny-side-up, poached. EVERY morning, there was an egg, and EVERY morning, I stared at it, stirred it around trying to hide it under something else I didn’t eat, all the while feeling like I might need to run down the hall. I’m not sure why Mama thought if she kept cooking eggs, I’d learn to like them. I HATE eggs, and I have used every excuse I could muster not to eat them. I even told Mama and anyone else who would listen that I didn’t think God intended for us to eat eggs, and I gave them several grossly-disturbing reasons why I came to that conclusion.

You cannot imagine how happy I was when the medical community agreed with me about thirty-five years ago. Finally! And I knew it all along. Eggs were bad for you. They were high in cholesterol. Why I practically had a party! Not only did I have a valid reason not to eat them, now I had a reason not to cook them for anyone in my family. I told them it was an act of love.

So now, three decades later, the medical community has decided that eggs are the perfect food. I’ve been in mourning since the announcement broke. I’m married to a man who wants eggs for breakfast EVERY morning, and I have no excuse not to cook them. We’re retired and I’m not in a morning rush, and now eggs are good for you.

Aha . . . finally, after more than six decades of turning green at the thought of eggs, I have discovered the perfect, irrefutable argument against them. I boiled eggs this morning for potato salad. (OK, confession . . . not even I like potato salad without chopped, boiled eggs.) But the ANSWER came to me. No one should eat anything that smells like hot, boiled eggs. Think about it. Would you eat a fresh peach or a slice of prosciutto that smelled like boiled eggs? NO! They would go in the trash. Would you eat a slice of warm pound cake just from the oven if it smelled like boiled eggs? NO! You’d be wondering what went bad!

I rest my case. I HATE eggs because they stink. I don’t think God intended for us to eat them, or else, He would have made them smell better.