Diving In and Hanging On

Summer has arrived in South Texas before the appointed June 21 summer solstice, and memories of last July compel me to hang on to the last of June’s cool mornings and cloudy afternoons. Even in retirement, I’m not so acquainted with that “summertime and the livin’ is easy” stuff, but I’ve committed to enjoy a bit more down time this summer, and I hope you do, too. Maybe a picnic or wading in a stream, or watching fireflies, or lying in a hammock.

The hammock, such a simple and yet profound contraption–one of those inventions that makes you say, “Now, why didn’t I think of that?” A hammock—cords carefully entwined and knotted, secured, and usually suspended between two trees which could probably tell some delightful stories.

I don’t know about you, but I do not enter a hammock as easily as I slip into bed or into my cuddle chair in the studio. Or at least, that’s what I thought until one day at the Quiet House, the inviting cottage atop the highest hill at Laity Lodge. The morning breezes were calling me, so I picked up a novel I was reading and headed toward the hammock just outside the front door. The jagged rocks underneath the hammock looked like potential disaster to me, the cautious, clumsy one. It is well-known among friends and family that I’m not much of a risk-taker when potential pain is involved. That said, I needed to study this situation, calculate the risks and strategize my safest entry. So I surveyed and plotted, trying to come up with the most logical and safe way to enter the hammock, and soon gave up and just dove in.

Swinging between those trees was a little shaky at first — but what a thrill! Proud of myself for allowing my caution to go the way of the morning breeze, I got comfortable and opened my book. Thirty pages later, I felt a need to shift my position. The pressure points, usually at the knots that bind and bear the most weight, were poking into plump flesh. Just shifting a bit relieved the problem. The hammock knew all along where I’d be most comfortable, but I had to resist a little. I learned, with a hammock, there’s this whole balance thing when moving—best not to fight it, just hang on. Oh, and then, you have to get out of the hammock. . . there must be easier ways than I experienced. 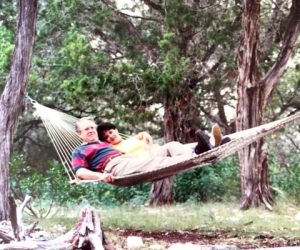 I learned some lessons in life between those two trees — lessons about cords that bind, caution versus risk, diving in, pressure points, the role of the tree, hanging on and trusting when you’re suspended above safety. God speaks in the simplest of experiences. Thank you, Father, for that hammock . . .

Whatever you’re doing this summer, don’t miss an opportunity for enjoying the simple things and perhaps an experience with God in the doing of them. I highly recommend a snooze in a hammock. Keep a couple of things in mind—it’s more fun with two, and you can always remove your protective gear once you’re situated.