November is my absolute favorite month of the year—cooler temperatures, earthy red and gold colors, the scent of pumpkin and spices, the Beaver Moon and the anticipation of Thanksgiving and Christmas. What is not to treasure about that? I cling to November because I know the gray cold of January is on its way, even in South Texas.

I set CHRISTMAS AT GREY SAGE in the Sangre De Cristo mountains of New Mexico where December weather can be fairytale or fierce and enchanting or impacting. The weather during that Christmas season was a natural force, setting in motion a significant change in plans for Christmas travelers. And that change was like the proverbial snowball rolling down the snow-covered hill, picking up speed and more impact, bringing changes in people’s lives, not just their plans.

Alo is one of my favorite characters in this cast. He is of Hopi Indian descent—calm, wise, but a take-charge kind of man when necessary. He lives close to the land and knows how to read the signs in nature. Read this excerpt from CHRISTMAS AT GREY SAGE to hear Alo, and you get to meet Bea, the retired ballerina. You’ll be learning more about her next week. 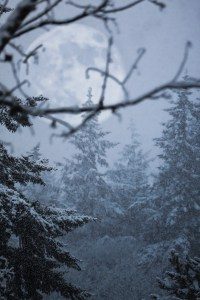 Excerpt from Christmas at Grey Sage

“I want Alo to finish what he was telling me. Some of the rest of you might find it interesting how he predicts the weather.”

Alo took his seat on the stone hearth again. “Sir, you give me far too much credit. I’m no meteorologist. These are the old ways my ancestors used, and they still work.”

Henry removed his pipe and tapped it. “So you were saying that halos around the moon forecast snowfalls, and you were beginning to tell me how you predict an unusually cold winter.”

“Yes, the halos have been telling us about the coming snow. And back during the harvest season, thicker than normal cornhusks told us to expect a cold winter. Then there was an unusual abundance of acorns this year, and that kept the squirrels busy for weeks. And the thick, bright bands on the raccoon tails. All signs of bitter cold coming. And then there was the whole army of mice that took up residence in the barn very early this year.”

Beatrice interrupted. “Did you say an army of mice?”

“Yes, I did say that, but you’re not to worry. You won’t find a mouse anywhere around in Grey Sage. I took care of that.”

“Remember, Bea,” Lily added. “Alo has taken care of the mice. You have absolutely no need to give them a second thought.”

“Of course I’m not worried. I once was Clara in The Nutcracker.” The look on Beatrice’s face let the others know that she had departed for a different time and place. “Yes, Grandfather Drosselmeyer gave me a nutcracker doll for Christmas, and that dreadful Fritz broke it, but Grandfather magically repaired it.”

Beatrice rose from her seat and stepped in front of the hearth as though ballet slippers covered her bony feet. “And I fell asleep under the Christmas tree, holding that beautiful nutcracker.” She, as though choreographed, shrank and folded herself up with fluid motion until she was curled up on the rug in front of the fireplace.

Eyes rolled as Beatrice drifted happily from one reality to another, but the telling of her story brought such joy to her, no one had the heart to interrupt her.

Changing weather, changing realities, changing times, but the message of Christmas is one of our Changeless God who surprised us all and changed our eternities forever. Stay tuned for more about Beatrice next time. She has much to say about Christmas in her uninhibited ways.