Whose Load Are You Carrying?

News of the past few days—Hurricane Florence’s wrath bringing high winds and floodwaters to the East Coast, and then the pictures of those weary folks whose lives have been altered by circumstances beyond their control—it all reminded me of a memorable scene from one of my mission trips to Guatemala.

One morning after our mission team’s two-hour session in a public elementary school, the local Guatemalan pastor who was with us invited us to make “home” visits in a village near the school. He had dreams of starting a church in this village, and he had the idea that home visits might open some doors. So, we divided our team into three groups to accompany three groups of men and women from the pastor’s church, and we began our home visits and deliveries of bags of rice and beans and fresh fruit to these impoverished families.

Now, these home visits were not exactly door-to-door in a residential neighborhood. These visits meant tromping up through rows of corn stalks that grow ten feet high, down cow paths, and finally to a mud-packed “road” riddled with gullies. The small houses were humble—dirt floors, unpainted cinder block walls, and tin roofs. Often, the one-room structures were partitioned into spaces with old shower curtains and were populated with chickens and dogs roaming through them as though they were just other children.

Three Guatemalan sisters from the church in Xela were with us. Here’s the point — as I walked alongside Hermana Mirza that morning, she carried her personal shoulder bag and a heavy bag of groceries. Her aging body indicated she had been carrying heavy loads for a long time. I asked her to allow me to carry the bag for a while since I had only one bag of groceries, and I knew she had to be tired. We were both a bit winded from the altitude. With her spirit of humility, she reluctantly gave me the heavy bag.

We walked on and talked for maybe ten minutes, and she stopped in her tracks. She looked behind us a short way up the hill, and I turned to look too. The pastor’s son-in-law trudged down the hill, carrying a shoulder bag with the supplies he had used in his skit at the school that morning, holding his diminutive three-year-old daughter on his left hip (the terrain was much too rough for her), and balancing a heavy bag of groceries in his right arm. Mirza trotted up the hill to meet him and took his child to lighten his load. 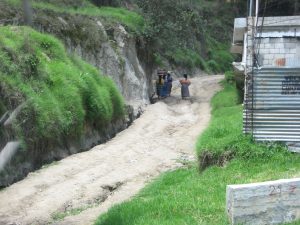 We all walk different paths, but with God’s grace, we’ll wind up in the same place.

No words were spoken. None were needed, but that morning’s scene was one powerful message. Lightening others’ loads is the way of the Christ-follower. God gives us eyes to see someone else weighed down under onerous baggage. We may not know the contents of the load, but is that even relevant if the person’s burden is so heavy and he’s in need of help?

In the aftermath of the Hurricane Florence, there will be many people carrying loads they did not expect to carry. Even with horrendous scenes of flooding and damage from winds, there have been the encouraging stories of first responders and neighbors helping neighbors. None of us will escape carrying unwanted burdens from time to time, and how grateful we are for the respite of someone’s help, like God’s own arms reaching out to us. When we’re not carrying our own loads, maybe we could be someone else’s relief just like Sister Mirza was on a summer morning in the Guatemalan Highlands or a neighbor was on the coast of North Carolina.