THE STORY BEHIND THE STORY 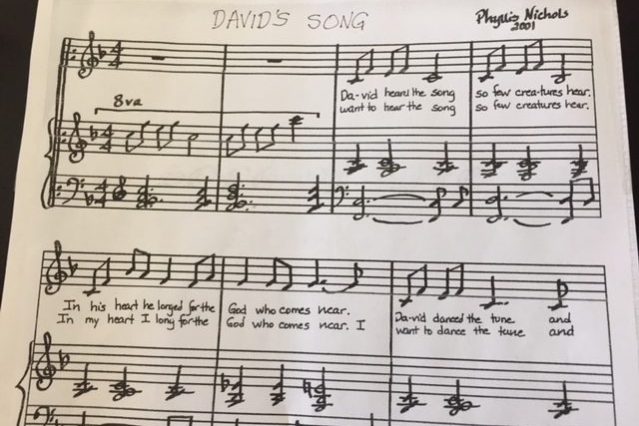 Writers are sometimes asked where we get the idea for a story. Sometimes those ideas come as “lightbulb” moments, and sometimes they just grow bit by bit inside us. Let me tell you about my experience that birthed RETURN OF THE SONG.

A few years ago, I received a call from the Executive Director of Laity Lodge, a spectacular Christian retreat center out in the Texas Hill Country. He issued an invitation for me to teach song-writing for their Creativity Week that summer. Song-writing had never been offered before, and I could not resist that daring invitation.

Of the eighty retreatants, nine of them signed up for my class because they wanted to write a song. To make it even more challenging for me, six of those ten did not read music, which meant I would have to notate and create harmonies and accompaniment for their songs. Then, they confronted me with their expectation that I should also write a song that week. Thursday evening after dinner was Show and Tell Night. Visual artists displayed their paintings; jewelry-makers paraded charms and bracelets; poets read their poetry; blacksmiths brandished their iron works; and ten musicians performed their songs. I debuted “David’s Song” that evening.

During that week as I struggled to notate unfamiliar African rhythms sung by an Ethiopian chaplain and assisted a bereaved young woman who wanted to write about her memories of dancing on the shoes of her deceased father, I was moved by their songs. Our little group of wannabe songwriters had rich opportunities to sit on the deck overlooking the Frio River and to talk about music. I realized several truths in helping with their melodies and rhythms. I listened to their stories revealing their passions, their failures, their fears, and their hopes. There was no song written that week that did not come from deep inside someone’s heart story.

The lyrics and melody of “David’s Song” played in my head day and night in between the rhythms and melodies of my students. David was the most famous musician in the Bible. I longed to hear what kind of music he played as a shepherd boy in those Judean hills, or to hear his victorious battle songs, or his laments over his own destructive choices, and then finally to hear his prayers and praises. Those melodies would have all been different, but they would have all been born in the same heart.

I wondered if was there a time in David’s life when the music was gone. When he just couldn’t sing. When he couldn’t even hear the music. Those haunting thoughts and questions stayed with me, and that song dogged me and still does. I’ve known people whose life circumstances drowned out the real music of their lives, and they were never able to hear the music again. But I’ve seen others, like David, who stuck close to Music-Maker and to those who could hear the song until his own music returned. As much as David’s story lived with me, I had no interest in writing a book about him, but I did have interest in creating a story and a place where these thoughts could be examined.

Set in Moss Point, a small, fictitious town in Georgia, RETURN OF THE SONG draws from the color-wheel of my life as one who grew up in a small Southern town. This book is as Southern as I am, and it is filled with quirky characters like some of the ones in my life, and it deals with issues that touch all our lives—issues that can stop the music.

Caroline Carlyle, the main character, is a young woman broken from grief. She a talented and classically-trained musician who still teaches and performs, but the music of her soul is gone. The tempo of her life changes when a musical savant, shrouded in mystery, appears in her studio. In the midst of surprising events and the entrance of unexpected characters, Caroline’s music returns.

RETURN OF THE SONG is the first novel in a four-part series entitled the ROCKWATER SUITE. With this cast of remarkable characters, there were far too many untold stories and unsung songs for just one book. I’ve tried to create a place where readers want to go, a place where life’s hardness and sweetness can exist at the same time, and where there is always a song.

“David’s Song” was the embryo of this book and is a significant factor in Caroline’s story. If you’d like to hear my recording of “David’s Song,” watch the book trailer for RETURN OF THE SONG and listen to the background music.